NEW YORK, Aug. 18, 2021 /PRNewswire/ — For more than forty years, Wilson has been at the center of New York tennis as the official ball and racket stringer of the US Open, and today Wilson Sporting Goods Co. announces the grand opening plans of its New York City pop-up museum and retail location, celebrating this historic role. 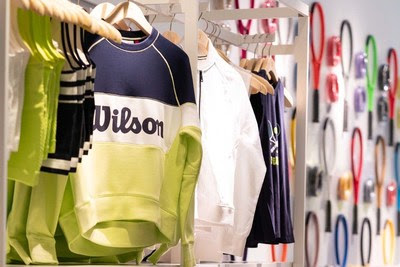 Located in SoHo, the new Wilson Pop-Up Museum is opening its doors at 594 Broadway tomorrow at noon, with legendary tennis star Billie Jean King. The pop-up opening precedes the 2021 US Open, which will take place in Flushing, N.Y. from Monday, Aug. 30 to Sunday, Sept. 12. Titled “Love All: A Wilson Tennis Experience,” the pop-up will pay homage to Wilson’s long-standing history in the sport of tennis, highlighting groundbreaking athletes and Wilson Advisory Staff members, and the extraordinary milestones in tennis innovation throughout.

While walking through the museum-like location, guests will be able to experience the brand’s legacy firsthand. The pop-up will also serve as a retail location, where Wilson Sportswear, including its latest tennis-inspired apparel collection for men and women, will be available for purchase along with a curated assortment of footwear, balls, accessories, and tennis rackets – including limited edition and exclusive items such as the Kith x Wilson Pro Staff 97, US Open Clash, and the Blade V8.

The store will feature a “racket maestro” offering racket customization, as well as interactive experiences including tennis ball art and apparel personalization. Once passing through the museum, the location will also feature a ballroom and gallery, featuring select Wilson hard goods and a unique display outlining the Making of a Modern Racket. The second floor is an exclusive Sky Box lounge, that will host events and offer tournament viewing. For a schedule of special events and appearances, please visit wilson.com or follow @wilson on social.

Historical milestones featured in the Wilson Pop-Up Museum include:

Jimmy McDaniel Breaks Tennis’ Color Barrier  – On July 29, 1940, McDaniel played in the first interracial tennis match against Don Budge. The event, set up by Wilson Sporting Goods, was held at the Cosmopolitan Tennis Club in Harlem.

Jack Kramer: Pioneer of Open Era Tennis – With a presence more powerful than his fierce forehand, Kramer’s impact on the game was enormous. The multiple Grand Slam® winner championed the serve-and-volley style of play and is considered one of the game’s great promoters, strongly advocating for open tennis between pros and amateurs.

Serena Williams Becomes Best of the Open Era – On Jan. 28, 2017, Williams added to her storied career by winning her 23rd Grand Slam® singles title at the Australian Open, the most by any player in the Open Era.

20 Slams, Only One Roger – Amassing an incredible 20 men’s major singles titles since turning pro in 1998, Federer is one of the most prolific men’s champions the game has seen. His career excellence in singles is led by dominance on grass and hardcourt where he’s won an Open-era record eighth men’s Wimbledon titles, five US Opens, six Australian Opens, and six ATP World Tour Finals. He’s done it all with a Wilson racket in hand, including his current Pro Staff RF97 Autograph.

Kith for Wilson – Wilson’s rich history with New York City and love for working with barrier breakers extends beyond the sport of tennis. In an homage to the zeitgeist of the beloved game, Wilson embarks on a landmark collaboration with Kith, an NYC-based global lifestyle brand known for creating premium products that capture the passion and evoke nostalgia. Through Kith’s discerning perspective and uncompromising standard, the partnership inspires future stories to be told, by a new generation of players and fans alike.

The Wilson Pop-Up Museum is just the beginning for the long-standing leader in sporting goods in New York. At the museum, Wilson will exhibit the stories of additional sports ventures in the coming months, all leading up to the grand opening of the NYC Wilson Flagship Store later this year.

Wilson opened its first-ever retail location, a “Wilson Heritage Store,” in their hometown of Chicago in July 2021. While the brand is new to brick-and-mortar, Wilson is not new to retail, having executed dynamic pop-up stores at sporting events like the Super Bowl, College World Series, and the US Open, for decades. Wilson will continue its direct-to-consumer expansion opening flagship stores in New York, Los Angeles, Beijing, and Shanghai in the coming months.

About Wilson
Chicago, USA-based Wilson Sporting Goods Co., a subsidiary of Amer Sports Corporation, is the world’s leading manufacturer of high-performance sports equipment, apparel, footwear, and accessories. The Company brings more than a century of innovation, history, and heritage across many sports including Racquet Sports, Baseball, Softball, Football, Basketball, Volleyball, Soccer, and Golf. New for 2021 is Wilson Sportswear, a performance-based lifestyle athletic apparel collection, that combines Wilson’s heritage and innovation with a modern and stylish flair for all to live like an athlete. Leveraging player insights to create products that push equipment and apparel innovation into new territories, Wilson empowers athletes at every level to perform at their best. Visit www.wilson.com for more information.